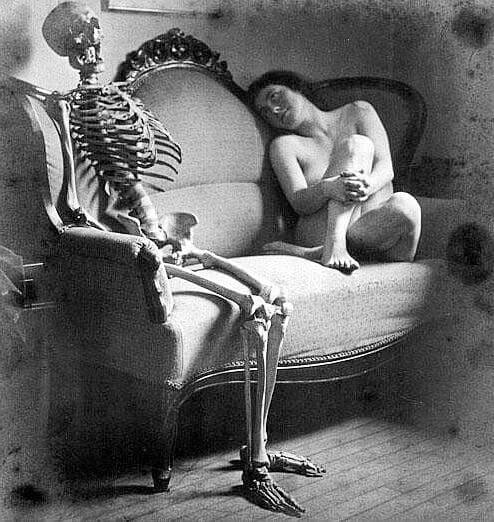 Saturn for the Bones and Scorpio for the Sex

I’ll stop yelling… I know you can hear me.

I want to talk a little about what happens where Saturn goes.

An old timey astrologer would tell you sickness and death

A new age astrologer would say something like growth and maturity.

Although this week is less dramatic then some we have had,

the relative quiet gives us a chance to renew,

and to process what has come before.

The North Node keeping company with Mercury in Scorpio

makes for serious and rather deep communication.

It’s a good thing to know your mind, and there is some fate at work.

A review or shadow of last June as Jupiter haunts old ground.

Saturn is still the Major Player,

along with Mars and Pluto in Saturn Ruled Capricorn.

Some grown up love stuff going down,

along with a slow systemic approach to goals.

Back to the Bad Guy:

Saturn is where you carry fear, and in Scorpio it can be obsessively so.

In the Natal Chart, Saturn can be the place where you want so badly to get it right,

that you fear you never will.

It’s where practice makes perfect. Where you can get it right. Where hard work pays off. Pressure.

Things become difficult, until the issue is forced.

Will you do it the right way?

No shortcuts, because you get a wrap on the knuckles every time you slack off or eff it up. That’s a Saturn Transit.

So who comes out of a Saturn transit stronger than they went in to it?

Most people actually, or at least quite a few. The ones who do the work.

Saturn is the old man, and the loner. Patient. Saturn asks for humility.

Give in and do it again?

Yes again and this time without typos.

Nothing especially cosmic about Saturn.Cause and effect.

But isn’t that nearly everything?

Saturn is physics after all.

Matter interacting with matter… Until maturity, old age, and death.

Ok, Saturn is not the most fun planet ever.

…and what about Scorpio, the sexy sign.. Why sex and death ? Other peoples money? Debt and taxes? What does it mean to be owed?

A really good way to consider Scorpio is just to think of intimacy. Complete intimacy between to actual humans. Flaws and all. Passion. This is not the pretty Neptune version with soft lighting and sweet songs. Passion can be ugly, and it’s a pretty word to cover strong feelings that cause most people to look away. In polite society, your passions must only be positive, but as passionate people everywhere know, passion is passion, it’s not a performance, it’s you unhinged and beside yourself. It’s fire and blood. The Scorpio version includes piss and vomit. Scorpio after all rules shit and anything or anyone that is discarded. The idea of being untouchable. Who is it that will touch you, when no ones else will? Those under the power of Pluto. Who will heal you? A Scorpio will. Scorpio energy can be right there with you and not look away.

Although they can be ruled by their obsessions, it is the drive to conquer, to penetrate completely, that forces a Scorpios next step. Scorpions are not afraid of power struggles, or going “there”.

Because of an unconquerable thirst for intimacy, and authenticity,

with themselves absolutely as much as with anyone else.

It’s Pluto Power. After you have cremated your life, whatever is left is what you are.

The idea here, in this three year Saturn in Scorpio transit we are in, is to scrape the icing off the cake. Take the meat of the bone. When you get to an absolute bare beginning, you know what you have.

Saturn in Scorpio, wants every single thing you have.

How will you know what you are capable of? Saturn is asking you to find out.

For real, no more real, no realer than that.

Who do you love when they are ugly? Who will help you when you are sick?

What you will do if everyone hates you? The inner strength when you are betrayed by a friend.

you may be ahead of the game actually.